Silky, luscious chocolate filling with a crispy chocolate cookie crust and a classic German chocolate coconut-pecan topping, all packaged in a mini pie.

After weeks of waiting, I was finally standing in front of the pie-filled display at Baked Pie Company in Asheville, NC.  The mouth-watering aromas and welcoming, homey atmosphere made me want to pull up a chair and dig in, but my husband was waiting in the car with Lily, our dog, so I had to be quick.  I had poured over the menu while planning our trip to Asheville, so I already knew I wanted a pie flight to sample three different types, but with 18 different varieties that change every day, choosing was difficult.  I quickly settled on classic pecan and s’mores.  Then I overheard the staff member describing the German chocolate pie and I was intrigued.

Back at our Airbnb, my husband and I savored the pies over the next few days.  The pecan and s’mores pies were great, but the unique German chocolate pie was by far my favorite of the three.  Think a rich ganache-like chocolatey filling in a crunchy chocolate cookie crust, and a classic caramel-pecan-coconut topping familiar to anyone that’s had German chocolate cake.  I instantly knew that I wanted to figure out how to make this at home, but in a mini form since mini desserts are adorable, portion-controlled, and perfect for two. 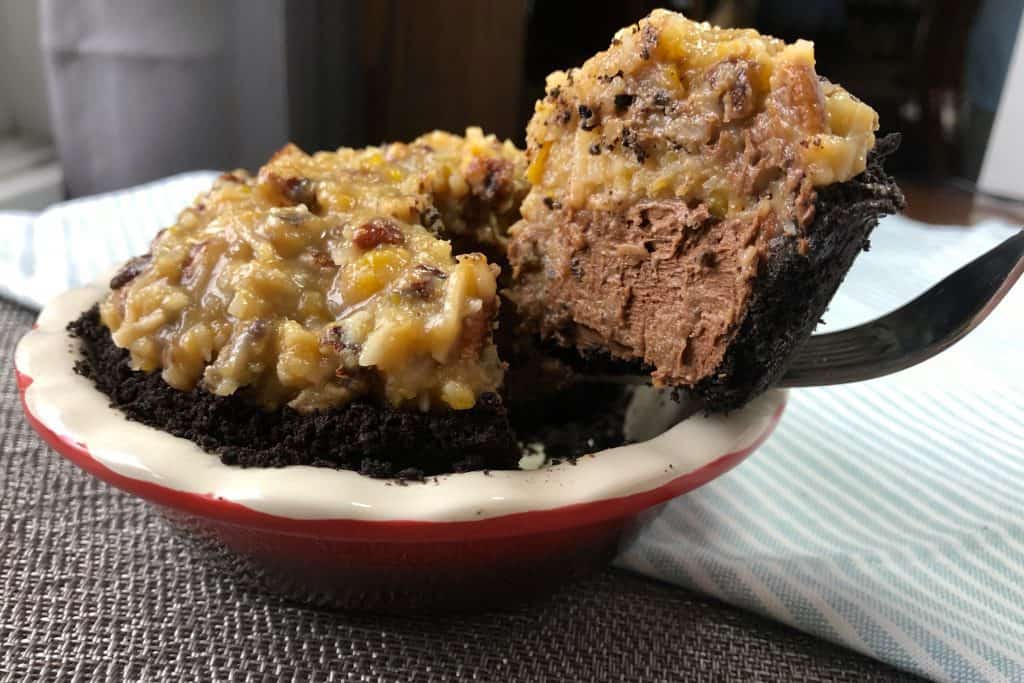 You’ll start by making the crust.  I used Nabisco Famous Chocolate Wafers, but if you can’t find them, then substitute Oreos.  Grind the cookies into crumbs in a food processor or in a large Ziploc bag with a rolling pin.  Mix 1/2 cup of the crumbs with 1 1/2 tablespoons of melted butter and press into a mini pie plate.  I got my mini pie plate from World Market many years ago, it’s just under 5 inches in diameter across the top.  You can find them at your local grocery store or find them on Amazon here. Bake the crust for 6 minutes at 350 degrees, then allow to cool completely.  When the crust is done, you’ll let it cool and working on the pie filling.

Start by heating the egg and sugar in a small saucepan.  You just want to heat the mixture enough to make the egg safe to eat in the no bake filling – don’t boil or the egg will start to cook and your filling will not be smooth.  Then melt the chocolate in the microwave in a small bowl in the microwave.  Allow both the egg and chocolate to cool.  Then combine the butter, vanilla, and salt in a mixing bowl and beat at medium speed until creamy.  Add the chocolate and beat until smooth.  Add the cooled egg mixture and beat for at least 6 minutes.  Turn off the mixture and use a spatula to scrape the sides and the bottom of the bowl from time to time.  When it’s done, your filling thicken and lighten in color.  Pour the filling into the pie crust and refrigerate for at least one hour. 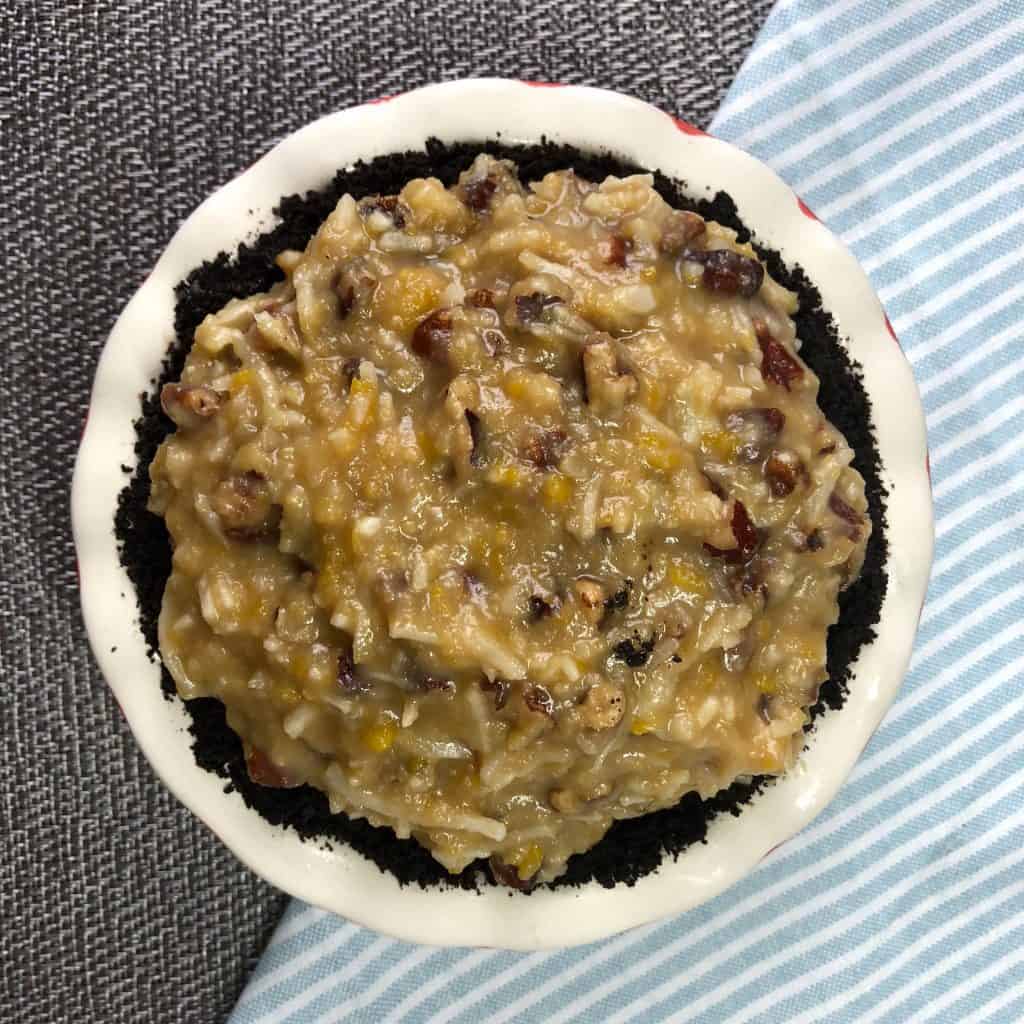 Then you’ll make the frosting.  Heat the sugar, evaporated milk, butter, and egg yolk over medium-low heat until the mixture is golden brown.  Add the pecans and the coconut and put in a bowl.  Refrigerate the topping until the pie is set.

Your final step is to add the topping to the pie and enjoy! 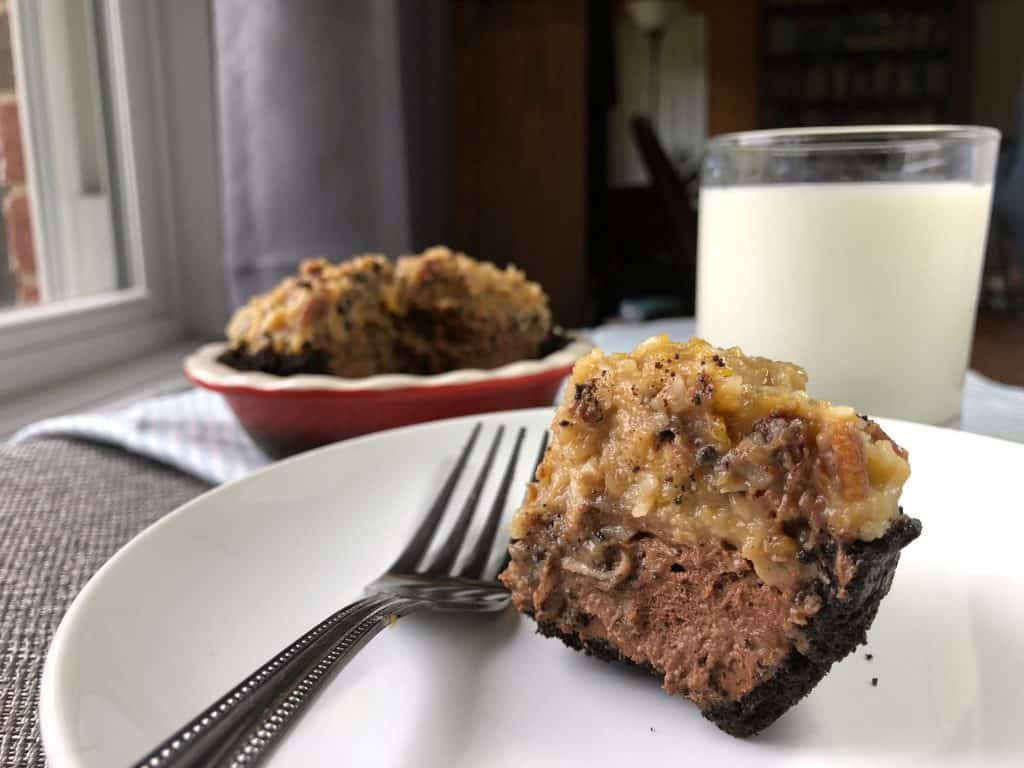 Leave a comment and review below if you try this to let me know what you think! 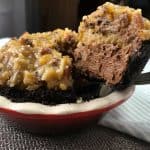 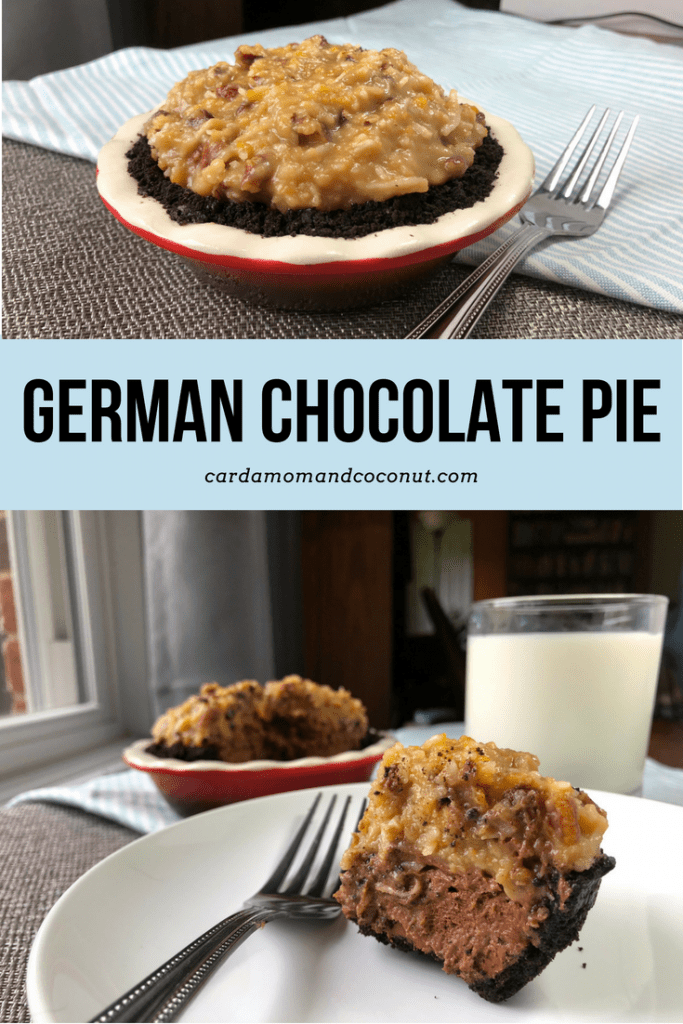 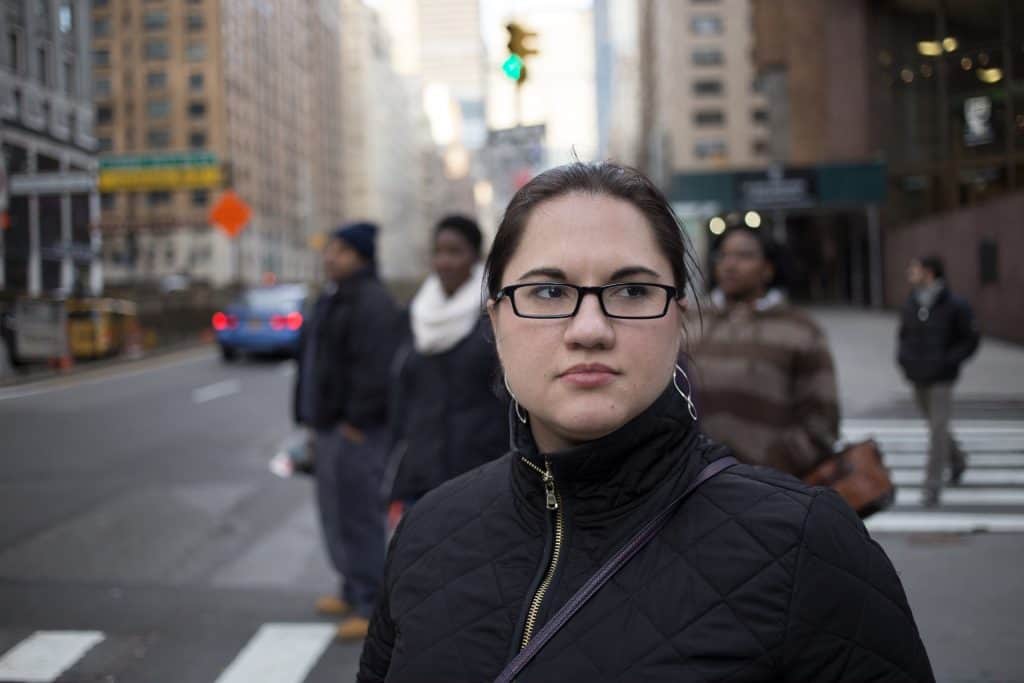